Follow Us: facebook   twitter   google+
This Tutorial Will Show You About Formatting A USB External Hard Drive In your Windows computer Using FAT32 (file allocation table) Instead Of the default Microsoft networks file system NTFS [1630]
Webune Support
Thu Feb 04, 2010
33 Comments
5272 Visits
are you trying to format an external USB hard drive using windows xp for example to format the hard drive with FAT32 so that other operating systems will be able to see the files? Today i had this problem. i bought an external hard drive USB2 and the hard drive was an IDE 100G drive, but it came full so i had a spare 400G drive i wanted to replace it. it was a seagate drive so it was easy to swap, they problem was that before, i was using the 400G drive for testing linux so it was formated with linux. but windows could not recognize the drive.

so i went into disk manager, but there was no option for FAT32 only NTFS - so i tried using windows 7, i did have an option to format the drive with exFAT but i wanted FAT32. so windows does not allow you to format any drive over 32G with FAT32

BUT, you can do it through the DOS terminal.

so if you want to force it open your DOS command and enter this command:


DOS COMMAND:
format /FS:FAT32 X:
X = whatever the drive letter for the USB drive is
NOTE: if for some reason your problem is that you cannot see the hard drive letter, create a partition first, if you right click on the disk, you should get an option to partition the drive

Format cannot run because the volume is in use by another
process. Format may run if this volume is dismounted first.
ALL OPENED HANDLES TO THIS VOLUME WOULD THEN BE INVALID.
Would you like to force a dismount on this volume? <Y/N>? y
Volume dismounted. All opened handles to this volume are not invalid.
Cannot open volume for direct access.

so when i was prompted: WARNING: ALL DATA ON NON-REMOVABLE DISK DRIVE: E WILL BE LOST? i selected yes

when when i went to disk manager i was able to confirm the disk was formating.. since my drive was 400G its gonna take some time. 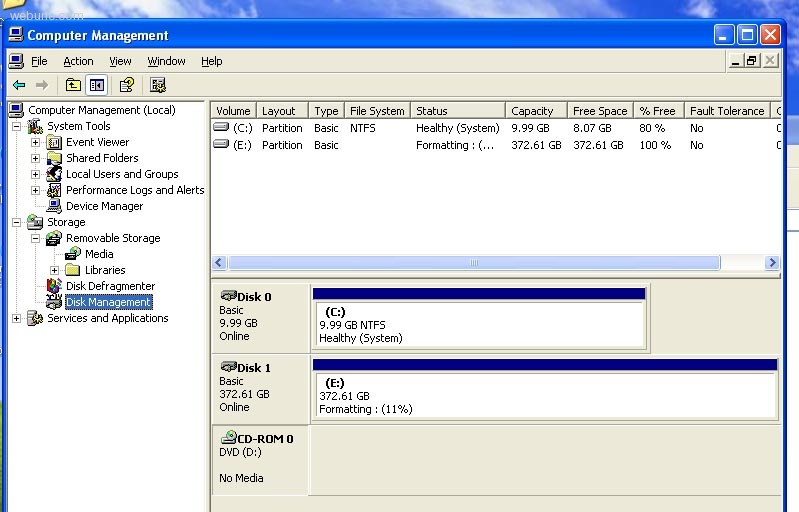 Linda
Fri Mar 19, 2010
help i type in dos command for fat32 and it verifies flash drive (which is raw) , at end it says volume is too big for fat32. size of my flash drive is 131000mg (128gb). the dos does not prompt about handles,dismount etc. hope someone can help thanks
kimber
Fri Dec 24, 2010
dos command said invalid parameter - x:
Anand
Wed Nov 24, 2010
i had tried this method. but the formatting didn't starts. it shows constantly 0percent completed.